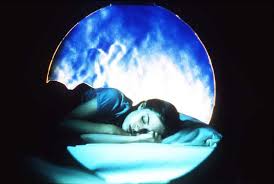 What a shame it is that there are certain objectivists on God’s earth that would claim to reject His existence simply because there is no objective evidence that supports such a notion.

To date, we have no objective evidence suggesting even the possibility of intelligent life other than on our own earth. Still, scientists are open and anticipant of such a discovery. As to their claims that extraterrestrial intelligent life might exist despite the enormous lack of evidence? Well, they answer, “Absence of evidence is not evidence of absence.” Their search continues, today, as radio waves are sent, on the basis of blind faith, into the infinite silence beyond our atmosphere.

Let us also observe a phenomenon that rests a little closer to home: dreams. Scientists who study dreams are able to hook electrodes to the surface of someone’s head and measure brain activity via electric current within the brain. As a person sleeps, the brain is very active. In some cases, it is even more active than when the person is awake. It is thought that the brain is more active when any given individual is sleeping. What’s the big deal? Despite the amazing technology, scientists admit that the only way to know for sure if a person was dreaming or not is to ask them. In these studies, scientists are forced to rely on the subjective nature of the dream and the subjective testimony of the dreamer. So, even science, as objective as it claims to be, operates out of necessity on the subjective nature of personal experience.

Now, I am even hearing that, according to medical science, the line that marks the boundary between life and death is becoming more blurred. The time of death, in the past, would be marked at the time the heart stopped. Now, thanks to scientific advancements, the time of death is not when the heart stops, but when the brain is completely dead. Still, there is evidence that the consciousness of a person may live on even after the point of bodily death. Scientists have measured brain activity suggesting that the firing of electrons, but near death and during moments of high gravitational pressure, create the sensation of a bright light at the end of a tunnel and a flashback to memories that were stored throughout a persons life. After near death experiences, however, the consciousness that returns to the body actually remembers the experience. Consciousness and personality were not lost even though, for all intents and purposes, the body died.

So, if our search for objective truth leads us away from God then we must be purely wrong in our line of thinking, for even science, at times, relies on subjective evidence to discover what objective evidence cannot tell us. Remember that absence of evidence is not evidence of absence. Let us pursue God!