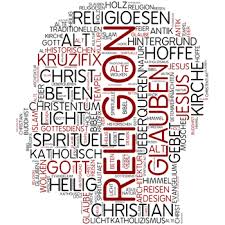 One walk down the street or down the school hallway or into a break room at work will reveal a vast diversity of worldviews and belief systems. There are Hindus, Muslims, Buddhists, Jews, Christians and Atheists. There are philosophers, scientists, artists and composers. There are children, teenagers, young adults, parents and grandparents. There are wise men and foolish and each one is different from the other. We each carry with us different experiences and different knowledge. Each person struggles with just how to define morality and each person is capable of both good and evil on a human level.

Virtually every belief system, religion or worldview has one thing in common. The goal of life seems to be that evil should be overcome with good. Virtually every belief system accomplishes this through human action. Religion, according to Webster’s, is “the service and worship of God or the supernatural”[1], thus placing the burden of religion on mankind’s shoulders. Religion, in this regard, is much like science: man made, man maintained, man centered and focused on discovery or the gaining of knowledge and experience. I am afraid that there are many among us who serve a religion rather than trusting the only One who is greater than our religious belief.

“Therefore, no condemnation now exists for those in Christ Jesus, because the Spirits law of life in Christ Jesus has set you free from the law of sin and of death. What the law could not do since it was limited by the flesh, God did. He condemned sin in the flesh by sending His own Son in flesh like ours under sins domain, and as a sin offering, in order that the laws requirement would be accomplished in us who do not walk according to the flesh but according to the Spirit. For those who live according to the flesh think about the things of the flesh, but those who live according to the Spirit, about the things of the Spirit. For the mind- set of the flesh is death, but the mind- set of the Spirit is life and peace. For the mind- set of the flesh is hostile to God because it does not submit itself to Gods law, for it is unable to do so. Those who are in the flesh cannot please God. You, however, are not in the flesh, but in the Spirit, since the Spirit of God lives in you. But if anyone does not have the Spirit of Christ, he does not belong to Him. Now if Christ is in you, the body is dead because of sin, but the Spirit is life because of righteousness. And if the Spirit of Him who raised Jesus from the dead lives in you, then He who raised Christ from the dead will also bring your mortal bodies to life through His Spirit who lives in you.”[2]

Before I came to know Christ, I did not believe that Christianity had anything worthwhile to offer. It is true that I was raised in a Baptist church. I went because my parents went, but people were fake. When we opened up the lesson book, all I saw were worthless words about how human morality was important and about how a so called God demanded good action from people. This “church” that claimed to believe scripture taught out of a lesson book instead of from the book they called God’s Word.[3] Constantly from the stage on Sundays I heard the words, “Do not! Do not! Do not!” when the same scripture that was being used called this way of teaching the “commands and doctrines of men”[4], not of God. In 2006, though, God revealed Himself to me and taught me that life was all about having a relationship with Him. Human religion and morality meant nothing if I was not under God’s charge. It was at that moment I began to see the Church as a community seeking God rather than some religious institution. In Christ, there was therefore no condemnation for me.

I hope that we can all notice that this life is not about the do’s and do not’s. It’s not about human religion or worldview for these things are always changing. Life is about knowing God through Christ Jesus, who died and was raised for us! Before Christ, we are in condemnation. In Christ, there is no condemnation and, according to Paul, this is an immediate effect of our coming to know Christ. The Law is powerless to save us. Religion is worthless because no amount of religion can rid us of the sinful nature that so entangles us. A shirt cannot remove its own stain. A cleansing agent must be added. In the same way, men cannot purge sinful men of the iniquities of mankind. A cleansing agent must be added.

Therefore, Christ came in the likeness of sinful man and death was crucified in Him! Because of this, the requirements of the Law are met in us through Christ, not through religion.

For those who are not religious, I hope to let you know that God desires to have the same relationship with the non-religious. Life is life, no matter how we might try and define it. If there is a God, then the purpose for all of life is found under God’s authority.

All of this, though, does not somehow indicate that good deeds fail to be good or that evil should be commonplace. What it does mean is that we recognize that good deeds, when they are performed by a sinful man, profit him nothing. Isaiah 64:6 states that even our good works are filthy rags to God. Here, Paul writes that those who are controlled by sinful nature cannot please God. The only way to please God, is to live in accordance with the Spirit and it is the Spirit of God who enables that sort of life; not our good deeds.

Religiously, human desire seeks to earn. In the garden, mankind wanted to earn the likeness of God, specifically in his knowledge of good and evil. Kings and tyrants want to earn the authority of God. Artists and musicians want to earn the creativity of God. Scientists and philosophers desire to earn God’s knowledge about the universe and about the human intuition. Religions seek to earn God’s eternity and, in themselves, are able to make no promise of that eternity. Without God’s gift, and God’s revelation of Himself to us, we are incapable. Coincidently, religion is one avenue that very broad spectrums of people use to find God. The good news for us, then, is that God has revealed Himself to mankind: through His relationship with Adam, through the Law, through the fulfillment of the Law in Jesus Christ, and in the giving of the Holy Spirit. Religion may be good for some, but God is not bound by religion and religion cannot earn a place with God. Only a relationship with Christ can accomplish that sort of status. The requirements of God’s law, since the Law was accomplished in Christ, can only be met if we submit to Christ. It is not a moral agenda or an escape from Hell. It is life, and the mind of sinful man is death.

When we are in Christ, we are no longer controlled by the sinful nature. We are, instead, controlled by the Spirit. The Spirit is given to those who belong to Christ and anyone who does not have the Spirit does not belong to Christ. My final question, then, is this. Are we alive? One can attend a church or a synagogue or a mosque. One can have all the knowledge that the universe has to offer. One can philosophize concerning eschatology or epistemology. One can offer up endless arguments for God’s very existence and still be dead. My question, the most important question of our day: Are you alive?

*Be sure and keep an eye out for the Pastor’s sermon from Sunday at goodhopebc.org