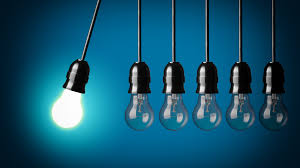 When I was in high school, I was president of FCA during my senior year. The people who led it before me almost drove it into the ground. There were maybe 10 people meeting together by the end of the year. During the time I led, it grew to about 30 people weekly. At the end of that year, it was time for me to pass on that leadership role. It was not something I could hold on to even though I had invested so much of myself into the group. In this life, I find that we invest ourselves into things we care about. We pursue the things we believe God wants us to pursue. We invest so much of ourselves into these things that we are afraid, many times, to let those things go, even if doing so is what is best. I know guys my age and older who try and relive high school over and over again because they invested so much. People in our churches try to hold on to the way things were because they helped build it. As a result, the church gets stuck in the past. People in power try to hold on to that power even when it’s not the best thing to do for their people or their organization, department, ministry, etc… As I think about this, I have to ask, “How should God’s people approach positions of authority?”

Then Moses continued to speak these words to all Israel, saying, “I am now 120 years old; I can no longer act as your leader. The Lord has told me, ‘You will not cross this Jordan. ’ The Lord your God is the One who will cross ahead of you. He will destroy these nations before you, and you will drive them out. Joshua is the one who will cross ahead of you, as the Lord has said. The Lord will deal with them as He did Sihon and Og, the kings of the Amorites, and their land when He destroyed them. The Lord will deliver them over to you, and you must do to them exactly as I have commanded you. Be strong and courageous; don’t be terrified or afraid of them. For it is the Lord your God who goes with you; He will not leave you or forsake you.[1]

When I look back to Genesis 1 and 2, I realize that people were not designed to have positions of authority over other people. Adam was in a position equal to his wife, Eve, and they both were to be stewards of the earth. In fact, it’s not until Genesis 3, after people rebelled against God that any person has authority over any other person, and it is eplicitly a result of humanity’s sinfulness and rebellion against God. People were not designed to rule over other people, and when God renews the earth, I am convinced that people will not rule over other people.

Here’s what this means for us. When we gain a position of authority over people on this earth, we should:

Similarly, when someone has a position of authority over us:

So far, we have learned that people were not designed to rule over other people. Human authority is necessary in a sinful world, but it is always temporary. At the end of our passage for today, Moses makes this amazing statement:

“Be strong and courageous; don’t be terrified or afraid of them. For it is the Lord your God who goes with you; He will not leave you or forsake you” (Ex. 31:6 HCSB).

Even though human authority over other humans is temporary, God’s authority is eternal. Human leaders will come and go, but God remains forever. There is a great truth here. Our hope and our trust is not in human leaders. I do not place my hope and my trust in a pastor or president or community leader. I place my hope and trust in the only God who will reign forever and ever. Not only this, but God, who will reign forever, actually promises that He will never leave or forsake His people. Because of this, if we belong to God we have no reason to fear anything in this world; even when we have bad human leadership or when we ourselves fail in the positions of authority that God gives us. God is always with us. He is forever King. Therefore, we shall not fear.