As we read verse 1 in Matthew’s Gospel, we must also read verse 17 in Chapter 1. We must also remember that Matthew’s Gospel is written by a Jew to Jews in order to prove that Jesus is the Messiah. Numerology was very important to Jews. While modern westerners, I think, have used the idea of numerology to invent many harmful ideas, Matthew clearly considers the number 14 to be of some importance:

In placing together 3 sets of 14 generations, Matthew describes in his conclusion to the genealogy of Christ that the Messiah is the fulfillment of 42 generations from Abraham to the Messiah. The Messiah is the 42nd generation. This number is important enough for Matthew that he skips describing some generations in order to format the genealogy in this specific format. He skipped a few kings, and his genealogy differs from the one that Luke records even though both are through the line of Joseph. That is why we must remember that Matthew’s purpose is not to provide a chronology of events, nor is it to describe every single event with as much detail as possible. Matthew’s purpose was apologetic, so his structure and order will work for the purpose Matthew had for his Gospel. Matthew went through great lengths to describe 42 generations (even intentionally counting David twice, 1:6-7).

We see similar numeric language used in the Prophets, particularly Daniel (who prophesied during the Babylonian exile):

While I was speaking, praying, confessing my sin and the sin of my people Israel, and presenting my petition before Yahweh my God concerning the holy mountain of my God — while I was praying, Gabriel, the man I had seen in the first vision, came to me in my extreme weariness, about the time of the evening offering. He gave me this explanation: “Daniel, I’ve come now to give you understanding. At the beginning of your petitions an answer went out, and I have come to give it, for you are treasured by God. So consider the message and understand the vision:

about your people and your holy city —

to bring the rebellion to an end,

to put a stop to sin,

to wipe away iniquity,

to bring in everlasting righteousness,

to seal up vision and prophecy,

and to anoint the most holy place.

Know and understand this:

From the issuing of the decree

to restore and rebuild Jerusalem

until Messiah the Prince

will be seven weeks and 62 weeks.

It will be rebuilt with a plaza and a moat,

but in difficult times.

the Messiah will be cut off

and will have nothing.

The people of the coming prince

will destroy the city and the sanctuary.

The end will come with a flood,

and until the end there will be war;

He will make a firm covenant

with many for one week,

but in the middle of the week

he will put a stop to sacrifice and offering.

And the abomination of desolation

will be on a wing of the temple

until the decreed destruction

Numerology was often used in the genre of Apocalyptic Literature. Using multiples of 7 (the number of completion), God describes to Daniel the coming of the Messiah, the Messiah’s being cut off, and the completion of the Messiah’s work to stop sacrifice and offering. Daniel also predicts, here, the destruction of the Temple that would take place in A.D. 70. 62 weeks was the incomplete number and 70 weeks the completion in the Messiah. Matthew, in proving Jesus of Nazareth to be the prophesied Messiah, organized his genealogy into 42 generations (that’s 7×6), the incomplete number to be fulfilled in the adding of one more 7 matching Daniel’s description of the Messiah’s “covenant with many for one more week.” Then, in Matthew 27:51, Matthew describes “Suddenly, the curtain of the sanctuary was split in two from top to bottom.” Daniel’s numeric prophecy was fulfilled and the incomplete number ended with the cutting off of the Messiah and the end of sacrifice and offering. In Jesus’ resurrection, the next week (or generation) would be realized, 70 weeks (or 49 generations, 7×7).

In organizing the genealogy into three sets of 14 as he does, Matthew insists that Jesus is the fulfillment of the Prophets and the one in whom the creation of humankind is completed. God created the earth in six days and rested on the seventh. Creation was incomplete. Christ is our completion and our rest. In Matthew 5:20, 48, Matthew will even have Jesus teaching that our righteousness must surpass that of the scribes and Pharisees; we must be perfect as our heavenly Father is perfect (moved from our incompleteness to God’s completed work in Christ). Before we get to verse one, we realize that in Christ we are completed creations. Our being made complete is evident in our sanctification. Without Christ, we are incomplete, regardless of our successes, stature, religion, or significant human relationships. From the foundation of the world to the end of redemptive history, God is sovereignly working all things together in order to make us complete creatures in Jesus Christ for His eternal glory and the good of His people.

With this short introduction, we can consider Matthew’s genealogy, structured for his apologetic purpose and not to give a strict chronology.

In his very first verse, Matthew explains that his account will be a historical record (though not a strict chronology). Particularly, this historical record will concern Jesus Christ, the son of David, the son of Abraham. It was necessary to prove, first and foremost, that Jesus Christ, whom Matthew would directly identify as the Messiah (v. 16), was the fulfillment of God’s promise to Abraham and also in the kingly line of David. Even in his first verse, Matthew is referring to hundreds of years of Biblical history and prophecy.

First of all, the Messiah would need to be a son of David:

“When your time comes and you rest with your fathers, I will raise up after you your descendant, who will come from your body, and I will establish his kingdom. He will build a house for My name, and I will establish the throne of his kingdom forever. I will be a father to him, and he will be a son to Me. When he does wrong, I will discipline him with a human rod and with blows from others. But My faithful love will never leave him as I removed it from Saul; I removed him from your way. Your house and kingdom will endure before Me forever, and your throne will be established forever” (2 Samuel 7:12-16).

It was understood that the throne to be established forever would have a descendant of David on that throne, though 2 Samuel 7 is not clear that it would be a single, eternal kingship. In 1 Kings 12:16-19, we read that there was a division in the kingdom and Israel (the northern kingdom) succeeded from the rule of David’s house. A son of David would remain king in Judah for several more generations. During the Babylonian exile, Zedekiah would be placed as king in Judah, ending the Davidic reign (2 Kings 24:17-20). Verse 20 even indicates that God was the one working this out through His own righteous anger. 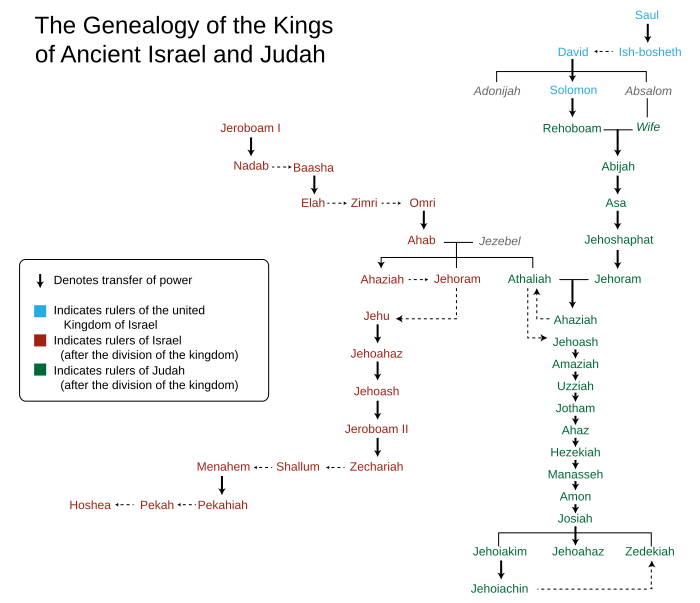 God’s promise to David, and God’s work in delivering His own people, could not be accomplished by human dynasties. People were insufficient and there would need to be a descendant of David rise up and deliver Israel from oppression if God’s word was going to prevail. God would have to do this. During the time of the exile, many prophecies would be made concerning the promised son of David. One of the reasons is that before the exile, Isaiah prophesied concerning the destruction and the redeeming of Israel. In chapter 10, he writes of His coming judgment upon Jerusalem by way of the Assyrians. In the same chapter, he writes that a remnant will return home to Judah. In chapter 11:1-2, Isaiah writes:

“Then a shoot will grow from the stump of Jesse,

and a branch from his roots will bear fruit.

The Spirit of the Lord will rest on Him —

a Spirit of wisdom and understanding,

a Spirit of counsel and strength,

a Spirit of knowledge and of the fear of the Lord.”

A descendant of David would rise up, the true vine in whom branches produce much fruit (Referenced in John 15) and the Spirit of the Lord would rest on Him (Matthew 3:16-17). So, Matthew is going to, in this genealogy, establish that Jesus is, in fact, descended from David and is the shoot coming out of Jesse.

Second, the Messiah would need to fulfill God’s promise to Abraham:

“The Lord said to Abram:

Go out from your land,

and your father’s house

to the land that I will show you.

I will make you into a great nation,

I will bless you,

I will make your name great,

and you will be a blessing.

I will bless those who bless you,

I will curse those who treat you with contempt,

and all the peoples on earth

The promise Abraham received was that his descendants would become a great nation and that all the peoples (or families) on the earth would be blessed through him (his descendants). This was not accomplished by human works or human dynasty either. Israel (Abraham’s descendants through Isaac) would, in their own power, reject other national groups and assume that God’s promise to them was meant only for them. The Messiah would fulfill God’s promise to Abraham, though. All the families of the earth would be blessed in His coming. Matthew would need to establish that Jesus fulfilled God’s covenant with Abraham. Anything less and He could not be the Messiah. This genealogy only begins to accomplish this end. Matthew will spend His entire Gospel working out how all nations are blessed and concludes in the Great Commission, “All authority has been given to Me in heaven and on earth. Go, therefore, and make disciples of all nations, baptizing them in the name of the Father and of the Son and of the Holy Spirit, teaching them to observe everything I have commanded you. And remember, I am with you always, to the end of the age” (Matthew 28:18-20).

So, what we realize is that God’s working through history is not dispensational in nature. This means that God didn’t act one way with Adam, then another with Noah, then another with Israel, and then another with the Church. The church hasn’t replaced Israel in this dispensation of grace as dispensational theology might suggest. God’s working with humanity through history is covenantal in nature. This means that God is always working to fulfill His own single covenant through redemptive history in order to accomplish His single purpose of grace from before the foundation of the world. The Abrahamic covenant, then, is a covenant fulfilled in Jesus Christ and all those who believe in Jesus benefit according to the Abrahamic covenant (which is also the Adamic covenant, the Noahic covenant, and the Mosaic covenant). They are all the same and are fulfilled in Christ. God will accomplish His purposes for Israel and for the Church just as He has promised. He does not change.